When you travel to the great northwest, you know you’re in for a beautiful, scenic trip, but that wasn’t all that happened during the 2015 NORM Conference in Bellevue, WA.

With days filled with meetings and networking, the 2015 NORM conference included entertaining and engaging speakers by night. We celebrated our 10-year anniversary for the organization and kicked it off Thursday night with a Welcome Reception and Presidents’ Dinner.

During the Presidents’ Dinner, Stephanie Aleite brought the crowd to tears. As the young face of rheumatology, she described herself as broken while she talked about her journey finding advocates for this debilitating illness.

“It was great to hear from a patient perspective and really see the insight and how it affects them,” said Lorie Hill, a NORM member for a couple years who attended the 2015 conference. “I actually have the same diagnosis, so it was also inspirational for me as I could relate to her.” 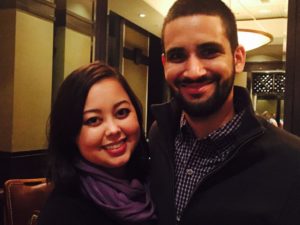 Stephanie Aleite spoke about her journey with rheumatology at the Presidents’ Dinner. Here she is pictured with her husband, Andres.

As Stephanie and her husband walked off stage, they thanked the crowd for the standing ovation.

On Thursday afternoon and Friday morning, we introduced the attendees to our first ever NORM Conference App. This allowed NORM to put the conference in the palm of everyone’s hands—literally! The application, once downloaded to a device, allowed participants to enjoy speaker biographies and presentations, conference schedules and even games all on their phones or tablets.

On Friday morning, the first two speakers, Lawrence Van Horn, PhD and Emily Graham, looked at regulations in health care and federal efforts to improve the value in health care. They talked in depth about the impacts these topics have on rheumatology practices bringing new information and clarifying murky details.

We heard rave reviews for motivational speaker, Judy Stovall, and Tracey Spears who brought fresh perspectives to balancing leadership roles. Then Penny Noyes spoke about how to get started with payer contracts, assessments and renegotiations. Wrapping up the first day, Jerry Clewell, PharmD, MBA and folks on the biosimiliar panel brought clarity to a question asked by many, “What is a Biosimiliar?”

Dr. John Huntwork is another member of NORM who attended the 2015 conference. “Any rheumatologist who participates in real-world business decisions should seriously consider taking advantage of this opportunity to listen and learn from some extremely intelligent people who are sticking up for the business end of rheumatology,” he said. “While NORM is of, by and for office managers more than their rheumatologists, as a solo practitioner I participate in many management activities and decisions along with my outstanding office manager, Samantha Vaughan, and find that attending this meeting myself is extremely beneficial.”

While there was a lot of learning, we had fun too! Friday night, our reception and Founding Fathers’ dinner gave everyone a chance to relax, network and bring reflection and thanks to those who created NORM and helped it grow over the last 10 years.

Our NORM Founding Fathers during our 2015 NORM Conference.

Dr. Huntwork said Dr. Amiel Toyaker’s presentation was, “Perhaps the most valuable lecture I have attended anywhere in the last decade. Thanks to this, coding has actually gotten easier since the transition to ICD 10.”

Breakout sessions rounded out a day of learning before speakers explained another landmark change for the medical industry crafted in 2015: the Medicare Access and CHIP Reauthorization Act (MACRA).

“My head was still spinning from all the ICD-10 implementation work to be done, but Sophia Chen’s presentation of the Top 10 Things to Know About Value-Based Modifiers gave me a taste of what is to come under MACRA,” said new NORM board member Jay Salliotte. “She helped explain the changes ahead and gave us a few tips and to-dos so we can start preparing now.”

Our NORM Education Committee presented a dynamic interactive program on the “Red Flags of Billing.” Stop – Correct – Get Paid highlighted top billing pitfalls like billing incorrect units, under payments and zero payments just to name a few. The presentation ended in billing concern with ICD-10.

The final celebration on Saturday came with champagne and cupcakes. With 10 years of NORM under our belt, we toasted to the future. The 2015 NORM conference in Bellevue, WA had it all: informed presentations, impassioned, knowledgeable speakers and a whole lot of fun!

Lots of smiling faces left Bellevue with new knowledge, and we look forward to seeing you all next year in Mobile, AL!